A fantasy story of jungle fiction, Jumanji features the activities of Judy and her younger brother Peter who find a magical board game in a park near their home. The story and illustrations that children’s author Chris Van Allsburg created in 1981 reveal the fascinating events that befall them when they choose to play instead of tidying the house, a boring job that they do not like. The author-illustrator puts animals in place to represent the dangers present in everyday life.

Left alone while their parents go to the opera, the children soon find an imaginary world that intrigues them at first and then frightens. The mysterious game of jungle adventure shows them that even the most outlandish things can happen. As they ignore the note on the Jumanji board game to follow the instructions on how to play it, they soon realize their error in judgment. The young boy puts it into words by saying that he does not want to play the game anymore, but they can see no way out of it.

Each time they roll the dice to make a play, the events in the game start happening in their own home. They face imaginary events that include a hungry lion, a herd of rhinoceros in a stampede, a huge python, an enormous rainstorm inside the house, a bunch of pesky monkeys and a guide who seems confused. When Judy happens to land her game token on the square for the city of Jumanji, it ends the game and returns everything to normalcy in their comfortable and orderly home.

Jumanji Board Game from Cardinal Games

A game board can rarely make players feel pursued, but this one does just that. A little smaller at 10 square inches than the original board at 14, the Cardinal version packs the same punch as the original by Milton Bradley. The Cardinal Games Jumanji Board Game starts when players enter a symbolic jungle and try to reach the center of the board to shout “Jumanji” and win the game before anyone else. Players must roll the eight-sided dice to move to the spaces around the board, but some impediments delay progress. A five or eight space requires a player to wait until an opponent rolls one of those numbers. While not the best place to land, it does not transport a player to a worse location.

An option to take aggressive action can occur when a player lands on a Rhino Space. Choices include placing the Rhino figure in front of an opponent’s pond in an effort to block progress. A play that lands on a blank space can produce a danger card, and the game requires the holder to place it into the Jumanji decoder in the middle of the table and let everyone know what it says. Danger cards indicate the power of Jumanji to stop players from reaching the board’s center. An eight-second timer keeps things moving along. Progress can require players to make decisions that lead to difficult consequences. Players can rescue each other from danger by matching a secret symbol before time runs out.

Even though a roll of dice determines the outcome of the game, everyone has an interest in coming to the rescue of an opponent in danger. Adventure and suspense combine to create the possibility of everyone losing if the jungle overpowers them before they can finish. The game requires everyone to race against time before the Doomsday Grid fills up. Everyone benefits from pitching in to help opponents in danger when their own future seems at risk. The desire to survive the jungle adventures creates a bond among family and friends who enjoy an occasional escape from the real world. This Jumanji Board Game from Cardinal Games provides enjoyable entertainment for players age 8 and older, and it allows four players to participate. The rules of the game become clear with a little practice, and the suspense starts to build as soon as the opponents realize the potential dangers that face them in the jungle.

An updated version of a Jumanji board game that relies more on the newer Jumanji movie than on any previous iterations of the jungle experience, the Cardinal-Games-Jumanji-Escape-Multicolor offers three sets of adventures. With the colorful graphics and the depictions of dangerous animals on the board and the box, players may not realize that the original book by Chris Van Allsburg featured illustrations in black and white. Readers may have had to use more imagination then, but the Cardinal game of Escape Multicolor offers many enhancements that engage and please 3-5 players at age 10 and older. Escape Multicolor invites everyone to join the fun by providing an easy to understand adventure. 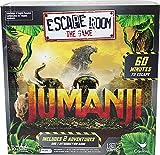 In a 15-minute introduction, it lets players start with the first adventure and get used to solving puzzles in a short time. Children who meet the minimum recommended age level can complete the intro adventure very easily. The enhancements that the Cardinal Games Jumanji Escape Multicolor version offers include a battery-operated timer that counts down the time that players have for making decisions about the dangers that face them in the jungle. The second and third adventures allow the full 60-minute time limit. Players meet plenty of challenges that involve deciphering codes that can set them free. Perfect entertainment for a family fun night, the Escape Multicolor adventures include The Search for Jesse and Break the Curse as the longer games and The Drumming Closet as the short one.

The storyline of the adventures adhere fairly closely to the newest Jumanji movie and lets players work to find a way out of danger. The timer makes sure that players compete with deliberate speed, and the Chrono Decoder requires the right keys to prevent losing valuable time. The website provides a download of the papers that players use for notes during a game, and printing a new set makes each game time fresh and exciting.