Sometime in the near future we will be dedicating an entire article to the best Harry Potter video games. This article with focus exclusively on the Harry Potter board games. The ratings will be based on difficulty to learn, amount of players, fun to be had, and replayability.

Released in 2016, the top game on list is Harry Potter Hogwarts Battle Cooperative Deck Building Card Game. Although several other games have come out in the last several years, this game has stood up very well over time and remains in our top slot.

You can play this game with two to four players, and like most strategy games, expect game play to take between 30 minutes to an hour (depending on which “Book” you are playing in the game). And if you’ve ever played anything like Pandemic or Forbidden Island, then you’ll recognize that this is a co-op strategy game where the players are supposed to help each other and work together to win the game. It’s really a lot of fun, even for adults. And, it’s fun for just two players – you don’t need all four players for it to be enjoyable to play.

In this Harry Potter board game, you are able to choose one of and play as one of the main Hogwarts students – Harry, Ron, Hermione, or Neville. Each player will get their own personal deck of cards used to acquire resources. Adding to your deck will allow you to gain new spells and other magical items. Other cards allow you to fight against the villains or regain health for your character. The goal of the game is to defeat all the villains and make Hogwarts safe again.

One of the things that we really like about this game is that as you play each level (“book”), it becomes harder and more involved. You’ll also notice that it takes longer to play the levels as you progress. But it’s really a lot of fun if you enjoy cooperative deck building games. It is a heavily story based game and you are able to read the instructions as you play.

And if you really enjoy this game, then you should know that there is an expansion deck that you can add for even more fun. It’s the Harry Potter: Hogwarts Battle – The Monster Box of Monsters Expansion Card Game. Keep in mind that you can’t play this expansion deck alone – it is meant to be added to the game above. 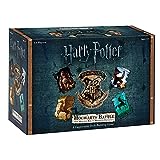 Here is a complete video review of our top ranked Harry Potter board game:

A new kid on the block, Harry Potter Death Eaters Rising is one of the the newest Harry Potter board games released by USAopoly and features very similar box art to other games.

In this game, the player must create a team of witches and wizards from Dumbledore’s Army, the Order of the Phoenix, and Hogwarts to defend the Wizarding World against the Death Eaters (as you may have guessed) and Dark Lord.

This is a cooperative dice game that requires strategy and teamwork to rid some of the key locations of the Harry Potter World against Dark Wizards. The goal of the game is to defeat all of the Death Eaters and eventually take on Voldemort himself. Being a dice game, a certain amount of luck is required, but you still need to skillfully build your team and manage the Death Eater’s influence at the different locations.

Although Harry Potter does not make an appearance in this game, Fantastic Beasts Perilous Pursuit still takes place in the Harry Potter World so we decided to include it on this list.

This game follows the movie fairly closely as you play as Newt, Tina, Jacob, and Queenie and try to track down all the escaped beasts from Newt’s suitcase before the Muggle community notices.

Like the Death Eaters Rising game above, this is also a cooperative dice game. You may have noticed that the recommended age for this game is lower than the ones above and that means it is easier for younger kids to follow and play along.

The final unique game on our list of Harry Potter board games is Harry Potter: Hogwarts Battle – Defence Against the Dark Arts. The rest of the games below will just be a Harry Potter inspired version of a classic board game.

As you may have guessed from the name, this is another deck building game inspired by the top game on our list. It is a standalone game and these two games don’t have any compatibility besides the name.

Harry Potter: Hogwarts Battle – Defence Against the Dark Arts is only a two player game where you compete against another person by building a deck and engaging in a wizard duel. The goal of the game is to stun your opponent three times to win. 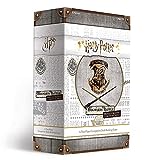 Our only real complaint about this game is that it is based off the movies and not the books. 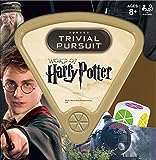 Another classic board game that gets the Harry Potter treatment is Clue. If you enjoy playing the old school version of the game, then you’ll really dig Clue Harry Potter Board Game.

The game board takes place in Hogwarts, and just like in the books, parts of the school can move and change where they are located. We think that is honestly one of the coolest things that any of these games offer.

The object of this game is to discover WHO did it, WHAT spell or item they used and WHERE the student was attacked. Three players are required for this game as there is no two-player variant of it. And the recommended age group is age 9 and up.

Expect game play for three people to take around 45 minutes, and for five people around two hours.

Though we find the game a bit expensive compared to other board games, we can’t deny that the game board looks cool and it’s definitely fun to play – if you have three people for game play.

If you’re already got the Trivial Pursuit edition above, then consider adding Pictopia: Harry Potter Edition to your next game night. You can play with two to six players and it is recommended for ages 7 and up.

The game comes with 200 Cards, 6 Answer Dials, 30 Prophecy Coins, 1 Game Board, 6 Movers, 1 Die, and Instructions. In this game for families and fans alike, you’ll encounter 1,000 picture trivia questions that will transport you to J.K. Rowling’s Wizarding World—discussing beloved characters and magical creatures, revisiting magnificent locations, and marveling at enchanted objects from the epic Harry Potter movies!

The game includes content from all the Harry Potter films including the newest movie, Fantastic Beasts. Honestly, we here at Gaming Weekender prefer this over Trivial Pursuit. 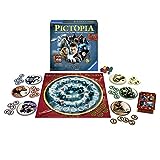 Can you solve the mystery of the forbidden spell? This Harry Potter Mystery at Hogwarts Game from Mattel takes you on a magical ride through the halls of Harry’s famous school. Someone has cast a forbidden spell and you need to figure out who did it, which classroom they were in and what spell was cast. But be careful: Peeves, the poltergeist, is out to get you.

This game is designed for between two to six players. The recommended age group ages 8 and up. Note that this is a “Clue” type game and not a trivia game. Compared to CLUE, this game requires just a bit more strategy.

Harry Potter Diagon Alley Board Game is one of the older Harry Potter board games and can actually be a challenge to find for sale new anywhere. And often, when you can find it new the price can be rather expensive. You can look for it new or try you luck shopping for it used on eBay.

You need between three and six players for game play, with the recommended age group being ages 8 and up. Expect for game play to take you around 45 minutes for three players.

Hurry and visit all the shops of fascinating Diagon Alley to buy wizard school supplies before they run out. The Harry Potter Diagon Alley board game is an exciting race of spending, scheming and casting spells to beat out your opponents. In the world of Harry Potter, Diagon Alley is the long, cobbled street filled with the most amazing shops in the world, accessible only through the Leaky Cauldron Pub in London.

If you’ve played and enjoyed the old school game Trouble, then you’ll like playing Harry Potter Triwizard Maze Game. In this game, players pop the die and move their playing pieces around the maze, racing to reach home.

It features fast-action Pop ‘N’ Race play as you race around the Triwizard hedge maze to capture the Triwizard Cup! Be careful – action spaces cause you to draw a card that can help or hurt your chances.

Land on a “draw” space to draw a Maze Card. Will you find a spell to send your opponent to another space on the board, or will a wind gust reveal a shortcut in your path? Cards can help, or hurt, your race through the maze, adding increased excitement and anticipation to the game.

Overall, we think that this is a fun game for families with kids and we like that it is one of the cheaper options out there for Harry Potter fans. 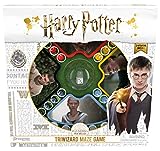